No matter how much a person would like to stay out of it, this election just refuses to allow that. I don’t even remember Americans being this polarized since Barak Obama first got elected.

It is no big secret that I didn’t want Trump for president. Being a voting American, I’m allowed to have a differing opinion, and to vote my conscience. That being said, I feel all the other voters in this country had the same right, and I don’t feel any bad feelings towards those people who felt he was the right choice.

But what the hell with the rest of it, people? I’m offended by pretty much all the rest of this shit!!

I can’t believe some of the nonsense I’m seeing and reading on Facebook. Are you seriously telling me that because I am not a Trump supporter, I’ve rejected God! Seriously, where do YOU GET OFF?

God did not tell me I had to vote for Trump!! Maybe He got busy with EVERYTHING ELSE IN THE WHOLE WORLD and forgot to clue me in. My guess is, He didn’t need my vote all that much.

And the signs saying Trump isn’t their president? Really, guys? That shit didn’t work when protesters held up those signs when Obama was elected. It ain’t going to work now either. 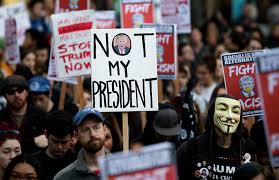 We have half the country convinced that the other half are complete idiots….That’s so idiotic?! Half of the people in this country are NOT morons just because they voted a different way than you did! The odds are just not there!! And you can hold up a sign that says Trump isn’t your president, but seriously… yeah. He is. He won, and by our own rules, he’s president for 4 years.

Even better. Why would we vindictively hope our president fails? How does that benefit any of us, other than to sit in a casual conversation somewhere in the future and say, “Well, I didn’t vote for him!”. That’s short-sighted. I don’t like this man personally, but I hope I’m wrong. I hope he doesn’t make a big mess, or build border walls, or any of the the other things I feel divide human beings. BUT…..I believe our government has enough checks and balances in place to stop some of the stuff that could really hurt us, and if they don’t, we’ll endure. If he messes up big time, we’ll elect someone else next time.

All is not lost on Planet Earth because of this election. My salvation is not tittering on the edge of destruction because I didn’t vote for Trump, NOR is it effected AT ALL because of politics in general. My IQ is not diminished, my lifespan has not been cut short, my family isn’t on the verge of destruction…. Everyone just needs to chill out.

I’m disappointed in a lot of the Christian Right who plaster judgemental verdicts on the status of other people’s salvation based on this nonsense. I’m ashamed of the people who used their disappointment in the decision to wreck other people with their words, or to physically loot businesses during protests. I’m sad that we as a people would wish to be found “right” rather than to have a tiny bit of hope that our God knew what He was doing when He allowed this leader to rise.

“Every person is to be in subjection to the governing authorities. For there is no authority except from God, and those which exist are established by God.” Romans 13:1

I believe wholeheartedly that we should pay attention to what our government is doing, including all of our leaders, protest peacefully when we disagree, and respect one another. But this election has gone over the rails with the hatred, bitterness, accusations, and judgements. We need to rein in the emotions, calm down, and start mending bridges with one another again.

I have family members and friends who are staunchly atheistic or agnostic. This only bothers me in that they might not make it to where I am going after this life. Other than that, they are, of course, entitled to what they believe. One thing I’ve noticed though, is the strange assumption that God owes them some kind of explanation should He turn out to be real. Of course, they will never get this opportunity to criticize Him.  He doesn’t explain Himself to His creation. Every knee shall bow, and every tongue confess, Jesus is Lord. And it won’t be on our terms. It will be on His.

Nothing really paints a better picture of the difference between a Creator and a creation than Job. Here are some questions a creation should always ask before challenging God.

It is a no-win argument He will never have with any of us.

Some of us were created for destruction, and I understand this. But it

grieves me that any of them should be people I love.